Spicing up the merchandise 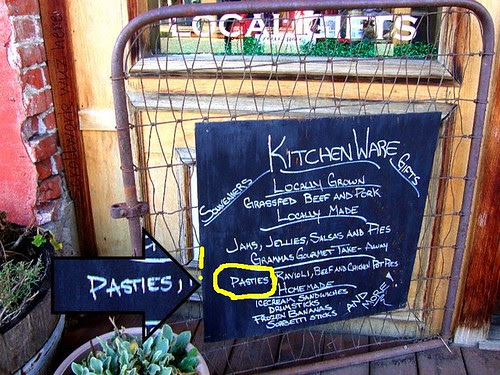 Spicing up the merchandise, originally uploaded by scrollwork.

Sure capped our after-Christmas leisurely stroll in downtown Sonora, CA.

Meet me under the mistletoe! 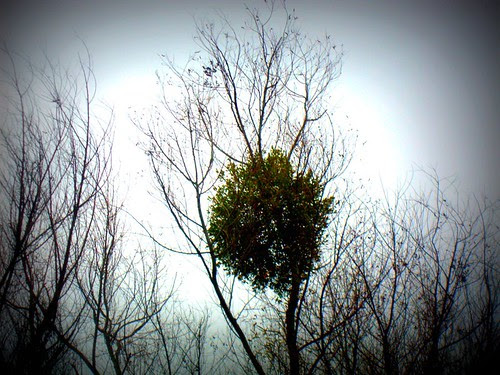 Meet me under the mistletoe!, originally uploaded by scrollwork.
The misunderstood mistletoe. Dependent on trees for survival, it's been labeled a parasite for so long.

"...rather than being a pest, mistletoe can have a positive effect on biodiversity, providing high quality food and habitat for a broad range of animals in forests and woodlands worldwide."

Turns out the the little misfit has enormous value after all.

Institutions deeply rooted in traditions and hierarchy can hastily dismiss their mistletoe workers and never count the loss in human terms. People drunk on their own power can treat their staff like pests to be eradicated.

"But mistletoe is also capable of growing on its own; like other plants it can produce its own food by photosynthesis."

Mistletoe brings people together. (People kiss under it!) That connection, multiplied globally (over cyberspace, in this instance) sustains the mistletoe when arrogant trees refuse to lend their branches for support.

Are you too adaptable to be authentic?

Ah, chameleons, the mood rings of the animal kingdom. Droll faces, fantastic emoting from the skin. We’ve given chameleons a bad rep. We watch their colors shift and dub them the icon of insincerity.
Maybe they’re just adaptable. And that can be a good thing, the thing that ensures survival. But in the human jungle, can too much adaptability cost us our authenticity?
Have you ever worked where the company culture was so toxic and so counter to your nature that just going to work everyday was exhausting? Because having to suppress your views, silence your voice and produce work exactly as specified, with no wiggle room, left you a squeezed out rag on the couch every evening?
And despite this, didn’t you resolve to work within the limitations and swallow the indignities, to nod, smile and be courteous, remember co-workers’ birthdays, stay out of the cat fights, contribute at meetings, and be a good little soldier because by golly, it was decent pay and an enviable job in a county with an 18 percent unemployment rate? Even if it was in a city rated the dumbest in the country.
But didn’t you cling to the hope that this would all lead somewhere good, that your patience, professionalism and stiff upper lip would earn respect, even if grudging, that Rasputin, the boss’s advisor, would ease her chokehold of tyranny and allow you a smidgeon of credit for a job well done, or the busybody would find someone else to water torture with her hallway pettiness?
You haven’t worked at such a place? I hate you. Hush. Let me tell my story. Re-read the three previous paragraphs, and then:
One day the Top Banana sent me a link to What life asks of us, a New York Times article. I wrote speeches for him, and this is how he sometimes generated nuggets to sparkle up his remarks. A big event was coming up, and we needed to start panning for gold.
I read the article. It touted the nobility of dedicating your life to the institution, which the author opined “gives meaning to life.” (sound of retching, mine)
Now you have to understand something. The Top Banana and I shared a cultural background, one in which the good of the group always comes before the good of the individual. I grew up on a military base and within a devout Catholic family. I had wanted to be a missionary when I grew up. I understood the sentiment of selflessness on the familial, societal, and spiritual levels.
But I wasn’t sure this was going to go over well. His audience would be several hundred young adults about to be let loose on corporate America. Most had grown up in the United States, fed from birth on a diet of Change the World, not Conform to the Firm. I asked the boss if he had intended for me to spin some of this into his speech.
You could, he said. Did I mention indirectness is another trait common to our culture?
In hindsight, I realize he wasn’t addressing the graduates with this article. He had sent it to me, period.
The Top Banana emailed me the day after I cleared out my office of its feng shui-correct décor. Thank you for your contributions, he said. My wife and I wish you and your family well and miss you already. Big hugs.
Do they make chameleon skin in my size? Will it slowly suffocate me?
Enter Microbe Finds Arsenic Tasty; Redefines Life
This more recent New York Times article talks about bacteria that by nature feed on phosphorus but by willpower (the scientists’, not theirs) subsist on arsenic. As in, poison. Toxic stuff.

“The bacterium, scraped from the bottom of Mono Lake in California and grown for months in a lab mixture containing arsenic, gradually swapped out atoms of phosphorus in its little body for atoms of arsenic.”

‘It’s a really nice story about adaptability of our life form,’ one of the scientists glowed.

While the scientists were patting themselves on the back about their really nice story, I’m thinking, hey, that was me. I had arsenic for lunch every day because the institution said so. You know you’ve sunk low when you empathize with microbes. And not just any pond scum, but bottom-of-the-lake bacterium. But wait, what’s this:

“The cells grown in the arsenic came out about 60 percent larger than cells grown with phosphorus, but with LARGE, EMPTY, INTERNAL SPACES.” (caps mine)

Traces of phosphorus remained in the bacterium despite the force-feeding with arsenic. One scientist described it as “clinging to every last phosphate molecule, and really living on the edge.”

“I was feeling sorry for the bugs,” one of them said.

Important People with compassion! Good to know they’re out there, as the ones I worked with seemed abundant in large, empty, internal spaces. And I don’t just mean between the ears.

You can live your life for the institution all you want. As for me, I will tend to filling my internal spaces, which have become less large and less empty with more time and distance.
Postscript: Within 10 months after the institution and I parted ways, the Top Banana resigned. How are we feeling about the institution now, hmm?
at 1:53 PM No comments: