The tipsy post: What if something you believe about yourself isn't a hard fact? 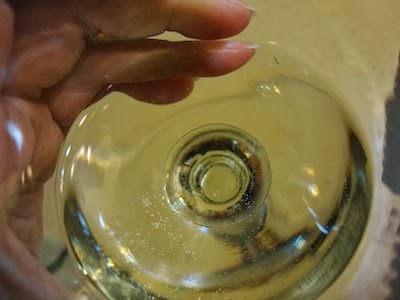 A quarter of a glass of Riesling is slinking down my throat as I type this. Until recently, I would've snorted if you had forecast that I'd be swilling wine. It won't be long before I'll be too sleepy to spell straight. Yup, I'm a lightweight. Lucky I'm not in the demographic of drunk texters.

One of the definites about me had always been "I don't drink." But that, along with a number of things I used to believe about myself, is no longer true. You ever have something hit you like that? At midlife, no less.

I used to believe I could think my way out of anything rash. We moved when Dad retired, so I attended two high schools, both all-girls. At one school, girls were getting pregnant and dropping out. At the other, they were dating each other, breaking up, and attempting to off themselves. I was running for student government. I was directing the one-act play for the annual competition. I was volunteering as a catechism teacher for first graders at a nearby school.

People were alienated by my lack of humor. At 14, I was seized with an urgent desire to fit in, so I cheated—once!—on a Biology exam. Of course I got caught; I hadn't had time to perfect my technique. When they summoned my Mom to the office I told her it was probably for some missing silverware from a campus event I had staffed. The principal had to set her straight about her high-achieving daughter. Mom asked why someone like me would need to cheat. Ms. Principal said some girls are never content with the high grades we already have. Oh, that principal thought she had my number.

Mom never gave me grief for broadsiding her like that. I wonder why. My Dad dictated my letter of apology to the principal, and I wasn't expelled. I don't think the cheating episode created enough notoriety for me to fit in. I hardly recognized my impulsive self.

Attending a Catholic university by age 15, I became aware, just barely, that some of my classmates smoked pot. I tried it once at 17 and flunked a P.E. exam. This was the same year I broke up with my first boyfriend and took up smoking for exactly seven days.

The night I turned 21, I asked a co-worker to join me for pizza. We got into a little necking outside the pizza joint. Hmm. Why hadn't I been self-conscious about my garlic breath? His proposition was rather banal. I still recall exactly what we said:

"We can do this any way you want. I'll do whatever you want," said the guy, whose girlfriend was pregnant with his child. I instantly reverted to my sensible self, the one who wouldn't have invited any guy in a relationship to anything outside of work.

"I just wanted to have pizza on my birthday," I reasoned with him. You think the French kissing might've sent a mixed message?

His ego bruised, he started a rumor that I'd been trysting with him for several months. I actually got called in to Human Resources. The HR director had her jaw open, about to address the situation, when someone walked in. She dropped the matter altogether. I put an end to the gossip by sending the guy a fake telegram of his own obituary. Remember telegrams?

I thought I'd put my good girl-gone-bad episodes behind me. One year and one move across the Pacific Ocean later, I started dating a man hovered over by three forceful females: his domineering mother, his wacko-off-her-meds ex-wife (I know, it's a cliché to call the ex- names), and their strong-willed 3-year-old daughter. They also had a one-year-old daughter who was a people pleaser even at that age. Technically the ex- wasn't an ex- yet, as they had only been separated for three months. The divorce wasn't final until nine months after we met and began dating.

Throughout the 12 months we dated, I lugged around a mental picture of Catholic finger-wagging. I was ashamed to be dating a married man. I had saved myself for someone who hadn't wasted any time getting in bed with someone before me. Yes, I did think like that in those days. I probably should've given him a pass considering he had a 10-year headstart on life.

Part of the reason I agreed to marry him was that I was so convinced I would make a much more stable mother figure for the girls than their own mother and grandma. Call me Ernestina With a Mission. That's what I used to believe about myself.

As a parent, I was stable, sure, but also very strict and impatient. I'd been raised in a military family. There was no talking back, no sir. To the two daughters, we added a third daughter, and all three had to put up with my ramrod straight mindset.

The experience of full-custody stepparenting through the teen years merits its own blog post, one I may not ever write. Suffice it to say the conflicts over parenting styles strained at the seams of our marriage. I once wailed at my husband, "I hate what you've turned me into—a stepmom!"


Once, we were camped out on the living room floor watching "Buffy the Vampire Slayer." It was the episode in which Buffy wants to go to bed with Angel even though she's been warned all hell would break loose.

Famous line by Buffy: "What if I never feel this way again about anybody?"
Cue loud snort and guffaw from the stepmom. Teen daughters pretend not to know I exist.

I moved out on year 14. By then I was OVER feeling guilty and being blamed for everything. The gulf between us yawned wide and unbridgeable. I lost my appetite. I cried every night the first week at my spare little apartment. I'm sure everyone else in the family was suffering, but I was too walled up to empathize. We mourned the death of the future we thought we'd been assured.

Being suddenly single at 38 was hard to wrap my head around. Especially being single in the U.S.! I would be expected to put out when I dated...w-w-what?!? I vowed to not date for at least two years. Then I heard myself on the phone with a longtime friend, toying with the idea of being promiscuous. If not now, when?

It stayed hypothetical. A puny part of it was my choice, but more of it was God rearranging circumstances. It was the biggest revelation about myself thus far. Left to my own devices long enough, devoid of the hedge of marriage and family, I could see that I might spin myself into a series of poor choices until I couldn't find my way back to me.

A marriage revived is like coming back from the dead. At least I think it is, but don't quote me, I've never been dead. I moved back home five years after we separated.

Sounds like a happy ending, right? Is that why I'm swilling wine? Am I toasting my cushy life?

Well, let me tell you. A week after my 50th birthday last Thanksgiving, the universe gifted me with a surprise: my first anxiety attack, from 2 a.m. to 6 a.m. I didn't know what it was when it was happening. Google filled me in. The most bewildering aspect of my anxiety attack is how my mind has finally betrayed me. It has no control over the physical symptoms. I'd love to say that this is life's final blow to debunk my belief that I can reason my way out of anything. But I've gained a bit of humility about that.

I've had around five or six more attacks since then, none quite as wild. I've debriefed women my age, including my yoga mates, my dance mates, and the knowledgeable staff at the local Sprouts grocery. I've stocked up on chamomile tea, linden tea, lemon-flavored magnesium powder to fizz in the tea, mineral bath salt, evening primrose oil, chewable stress relief gummies, and, for the worst of the worst insomnia-plus-anxiety, non-addictive sleep aid tablets. My husband's Christmas gift to me this year was aromatherapy for anxiety.

"Mom, you should drink a little Riesling, it doesn't have a lot of sugar," advised my best friend/youngest daughter, 26. She took in the information, processed it with the fact that the tannins in red wine devastate my head, and came up with her solution.