The Demise of Clockwise 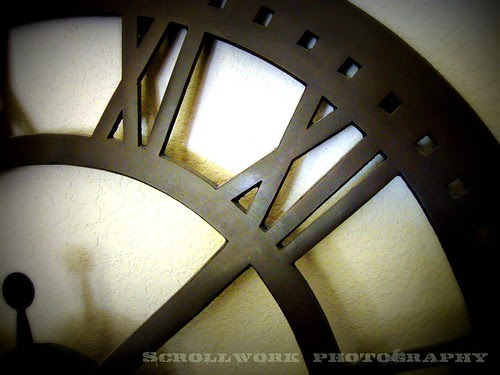 The Demise of Clockwise, originally uploaded by scrollwork.
I call out, "Get into Line of Dance; move counter clockwise around the ballroom."

The students freeze. Faces blank out. To a generation that tells time by cellphone, clockwise is archaic. Even those with alarm clocks on their bedside table rely on LED numerals. They can't read what the big hand and the little hand might be trying to tell them.

The generation gap spans widely at the dance studio where I teach. But that's OK. You couldn't get me to tell time by the sundial in my garden. And the only time we've ever used the likeness of an hourglass was with a miniature minute version that timed my daughters as they brushed their teeth.

It's not the speed of technology I rue, it's the lag of language. And it goes both ways. In another class, one of the 20-something teachers, instructing the men not to squeeze their partners' hands with their thumbs, said, "Your partner is not a Gameboy." Dead silence from the mostly middle-aged crowd.

Despite these minor communication blips, the art of ballroom dancing continues to find appreciation across all age groups. It's a joy to watch our students become fluent in the language of movement, attuned to the meaning behind the lift of a hand, the nudge on the back, the flick of the wrist. They grin widely as they jump on the rhythm train and it takes them on a breathtaking ride. Amid the huffing and puffing, there are outbursts of frustration, but just as many bursts of applause and hop-skips of delight.

Learning to dance requires such absorption in the moment that whether the class is an hour or three, it's always a pleasant shock to glance at the clock—the one with the big hand and little hand—and find we've been fastforwarded. We set goals for the next class, review the accomplishments of the hour just passed, and hug friends who were strangers barely an hour before.