To wiggle or not to wiggle 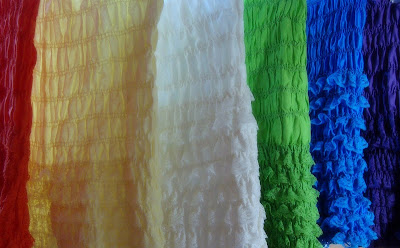 I was at the dance studio one night learning the rather raunchy dance called bachata for a performance. Those of you who have been dancing a while will understand where I'm coming from.

I think you'll agree that the healthy perspective to take on sensuous dances is that since we've committed to dancing it, we may as well give it the sensuality it deserves. Otherwise, why bother? why go half-baked? why not just dance the waltz, for heaven's sake.

The reason I bring this up is that another dancer, a woman in her early 20s, shrieked her disapproval when she saw that I was showing one of the male students how the hips move in the bachata. We were both facing the mirror, no body contact, and I had offered the analogy of the Tahitian dancer with the sharp hip up-bump.

I never feel like I have to defend myself and my teaching, but it does annoy me to have such infantile reactions. Later, the same woman objected when she was dipped "too low" by her partner because she didn't think it was refined (what with one leg curled around the guy's leg, a low dip would expose your undies unless you planned ahead and wore bloomers or booty shorts).

For someone who flits from beau to beau in the lifespan of a fly, she struck me as someone who "doth object too much."

If I want to let my inner sexy girl out via dance I will, because my lifestyle is blameless and I have no need for putting on virginal airs. Unfortunately, I will also have to put up with people with saintly pretensions as they barf their hang-ups in my face.
at 11:39 PM No comments: 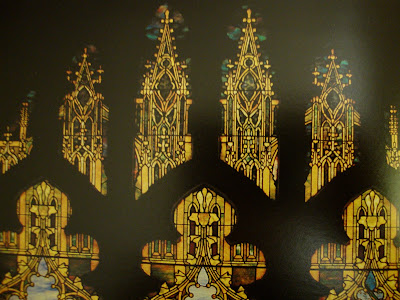 Strolling along Union Square in San Francisco one weekend, we passed a beggar. Steve dropped a couple of coins in his hat. Next thing we know, he was right behind us, hollering, "You can keep your nickel." I take it he was insulted. Steve told him to give it to someone else if he didn't want it. I was relieved when he eventually quit trailing after us.

Who the heck gives a beggar such a paltry sum? But what nerve for the recipient to reject it. Doesn't he know it's not a beggar's market?

The church of St. Peter and Paul was a few blocks away. We entered and took in the grandeur of the interiors. Stained glass, balusters, columns, carved wood confessional booths, the works.
"There's something comforting about old churches built in the grand style," I whispered.
"Yes, this one reminds of me  Las Vegas," Steve  said.

By golly, he may be right. Doesn't one of the hotels recreate a baroque outdoor scene indoors, with convincing clouds on the ceiling and a thunderstorm?

"The clink of change dropping into the candle box sounds like the slot machines," he added.

Suddenly a short Chinese woman thrust a $5 bill at me. "Do you have change?" she asked softly. Turns out she wanted to light a candle, and the sign asked for $3. I thought, goodness, if you want a prayer granted that badly, just drop your $5 in and say, "Keep the change." Same thing Steve kept trying to persuade the beggar. Out loud, I apologized for not having change.

Buying our return ticket on the train, Steve was approached by an older man accompanied by his daughter.  They were from Baltimore -- "Baltimore, Maryland" he specified, as if I might not know where it was. "Welcome to California!" I said, and they ignored me. We showed them how to make sense of the route map and the fare chart. Steve kept telling him he could just drop $20 and get two tickets, and the change would remain on the tickets for their next time on BART.  But I could tell he didn't want to spend more than he had to, so I asked, "You'll likely be getting on BART again, won't you?" "Never," he said. Poor things. They didn't seem like they had a good time in California thus far. They just wanted to keep the change.
at 6:13 PM No comments:

My life as Goldilocks 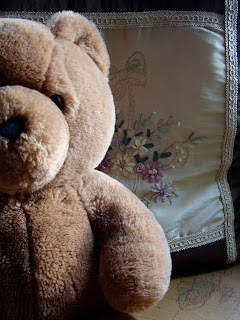 In this installment of As Scrollwork's World Turns, I bring you a snapshot of the ol' hubby.

Steve is just getting so forgetful. I awoke the other morning to his mystified observation, "Someone's been using my toothpaste." He had found it next to my toothbrush cup rather than at his own sink. So I roused myself enough to remind him that when mine had run out, I had asked him to get a brand that we both would like — no cinnamon-flavored toothpaste this time, please. He'd presented me with a tooth-whitening, breath-freshening purchase, and I'd given it my Good Housekeeping seal of approval.

But we are so used to having separate toothpaste tubes, separate milk cartons (I drink soy, not cow's), and separate paychecks that this whole conjugal property concept has thrown him.

Someone's been eating my porridge. My life as Goldilocks, if she'd married one of the three bears.

Another morning he asked me where the umbrellas were, so rather than explain how to find one, I got up and hung one from the front doorknob while he got ready. After much hugging goodbye, he left...the umbrella. He called me at noon and I fussed. "You'll catch your death of cold," I said. Nothing like granny-generation isms to bridge the age gap between us. To humor me, he said, "Yes, I might die."

The good thing is, he hasn't given up on supposedly learning Mandarin from a set of CDs borrowed from the library. He listens during his commute, then comes home muttering monosyllabic, guttural sounds, assigning meaning to each: "meme means daughter, wa means I..." I suggested he email my Mom in Mandarin and his eyes widened. "Will I have to use Chinese characters?" he said.
at 5:06 PM No comments:

Mother henning to the max

Is there a statute of limitations on motherly smothering? My mother, soon to be 83, is driving me insane with her hand wringing. I teach ballroom dance, which she calls my "dance thing." She bemoans that I am not applying what I learned in college. How many literature majors (who don't end up teaching) apply what they learned in college?

When I shared with her my progress toward opening a handmade clothing and photography shop on etsy.com later this year, she cautioned that no one in the family ever succeeded in business. Well, I pointed out, no one else in the family ever became a journalist or speechwriter. Or married an American and made a life here, for that matter. Except for me. Perhaps I should've been a flight attendant like my sister, or a fighter pilot like my brother, or an Air Force colonel like my father, since those are the roads well taken.

Does your mother ever cluck-cluck you to distraction?
at 3:57 PM No comments:

Rage against the boredom 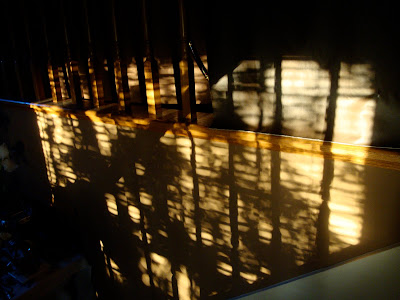 "I’ve never heard of anyone who worked a boring job, came home to a boring family, watched three hours of boring television, and then proceeded to write something of spellbinding greatness. It just doesn’t happen. Here’s why: your writing is an extension of who you are.

Save the worst for Mommy 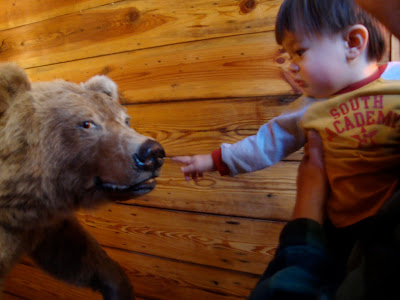 Our 1 1/2-year-old grandson, William, spent the afternoon with us Saturday while his Mom went to a wedding at the Doubletree and his Dad helped a friend with a roof. What a delight and a pleasure little William was to have all to ourselves for the first time! He was so mellow and fascinated by everything. The TV remote, an empty plastic juice jug, a cereal box from the recycling bin, the light from my mouse shining on his bellybutton.

I actually got so relaxed that I conked on the couch for about a half hour when Steve awoke from his nap, and he seamlessly took over babysitting. Next thing I know, he was telling Sharon on the phone, "Yup, Oma (that's me, Dutch for Grandma) got worn out. I gave William some tea in his sippy cup." Oh, ooops! I bolted up and checked the cup. Sure enough, bottled tea instead of the water I'd put in there earlier. I guess Steve was having some tea and William had gotten curious. Grandpa doesn't have much experience with babies, not even his own, can you tell?

The spell broke the minute Sharon came back: a screaming, kicking William objected to being "abandoned" by her when she went to the bathroom. He got himself all worked up until he threw up on her. Steve expressed so much dismay over the Jekyll-and-Hide performance that Sharon felt embarrassed and tense. I kept reassuring both that it's normal for a wee one to save up his vehement best for the mommy, to punish her for leaving him. And that he had, after all, skipped a nap and was due for his dinner. He settled down quickly once we sat down to eat. After dinner, we went out on the shady deck and unleashed a bubble barrage on him. We so look forward to another chance to have him with us.
at 3:47 PM No comments: