Beat the post-holiday (and beyond) blues

Dogs bounce back from being down in the dumps fairly well. Other critters, not so much. Here's an off-the-top-of-my-head list of what to try when you need to pole vault back to chirrupy cheer.

#1: Pick one guilty pleasure. Indulge. Briefly.
For you, it might be a glass of wine or a shot of vodka. But the phrase "I need a drink" is absent of promise to me because alcohol disables my system like sugar in a gas tank. Which by the way is a myth, according to Google. Better to seek revenge by pouring water in your arch nemesis' tank. We have not strayed too far off-topic: revenge is a guilty pleasure.

But back to phrases that don't personally apply. Take "comfort food." I only wish I could take comfort in food. Maybe if my nose hadn't been put out of commission by Zicam nasal spray, I might occasionally wax poetic about some culinary obra maestra. See also: Why I won't blog about food. 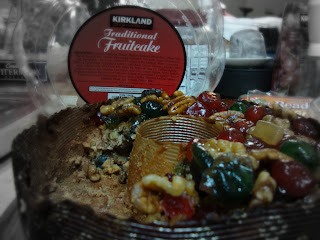 It's whipped cream for me when I want to indulge, and none of this fat-free abomination, either. I order a daiquiri for the whipped cream, and the hubs polishes off the rest of the drink.
Since we've mentioned him, here's his guilty pleasure. I know of no other American so devoted to fruitcake. That missing half is all his handiwork in one sitting. He was so content after that he fell asleep on the couch at 7:30 p.m.
Random Tip #2: Seek the light. Just don't demand that it shine on you all the time. 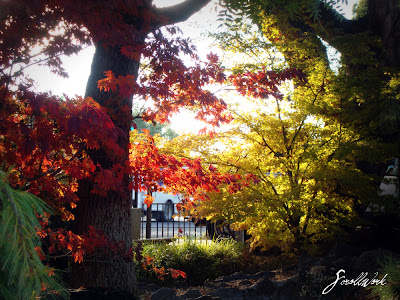 This is obviously best done outdoors in daylight, but if you're a shadow-craving vampire like me, that wonderful invention called electricity is a godsend. Is it blasphemous to mention vampires and God in one sentence? Thirty wet noodle lashes.
When you're not constantly chasing the spotlight or worrying about whether the light flatters your complexion, you can better enjoy the beauty in other beings. 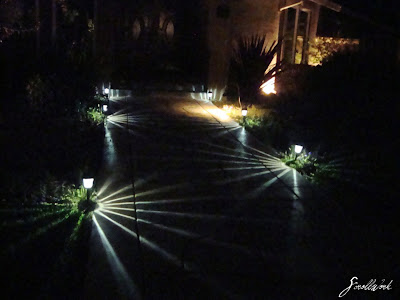 When we began walking for exercise, the hubs would get stressed about the fading light. "We only have an hour before sundown!" he'd say in a panic, forgetting he married a vampire who does my best work at night. To appease him, I tote the trusty point-and-shoot. That LCD screen is a marvelous thing. It works to calm a 58-year-old as well as a six-month-old grandfella. Husbands are just little boys whose outsides have grown bigger. Gotta love 'em.
The scarcity of light at night can be an opportunity for greater appreciation. 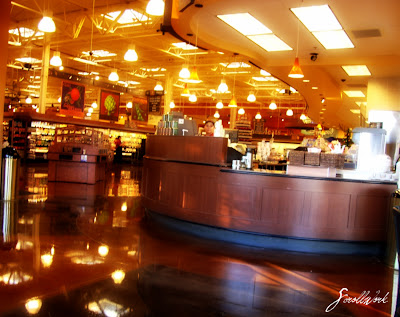 Indoor light can seem just as magical. You need to see it with the right eyes. Some days, a trip to this upscale grocery is no less transportive to me than a tour of a mansion for sale. My floors are never this polished, my light fixtures never this dusted. And the food samples are divine! 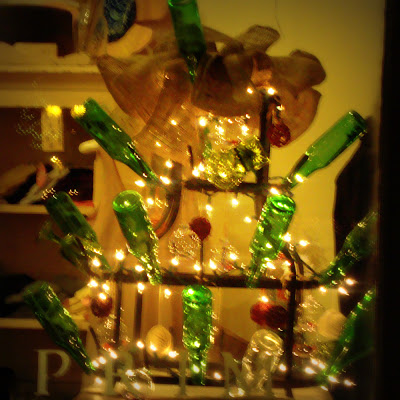 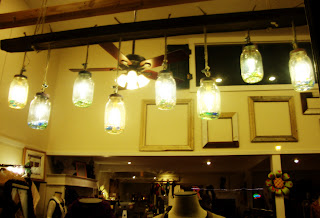 Store window displays are an excellent go-to source for escapist light. They're portals into a make-believe world. Much of marketing is making people believe, after all.
A personal blog functions like a store window. Sometimes I'm so into my own illuminated space in cyberspace I believe my own good-news press. It's not quite the same as being delusional; there's reason and intention in what I display.
It's the most effective antidote to the withering disdain tossed my way by certain folks of the bossy persuasion. They don't know me like I know me, and now like you know me. They don't know everything, they just talk like they do. Do you have people like that in your life? (Who doesn't?)
Perk-up Tip #3: Spot the whimsy. 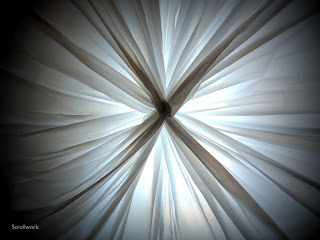 This is the bottom of a garbage bag. It reminds me of the top of a circus tent. Even household chores hold surprises. I would advise peeking before the bag is filled with banana peels, egg shells and moldy cheese.


Seek in the everyday what philosopher Sam Keen called "release from the mundane—a winged existence." Seek it in the here and now.


When I was negotiating my last day job, a well-meaning acquaintance advised me to hold out for the most vacation time I could swing. I told him I would rather take steps to ensure I enjoyed each day on the new job than try to stockpile days to escape it. 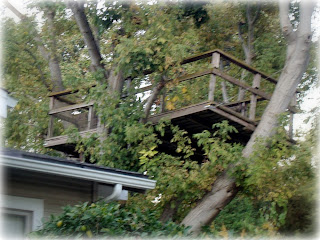 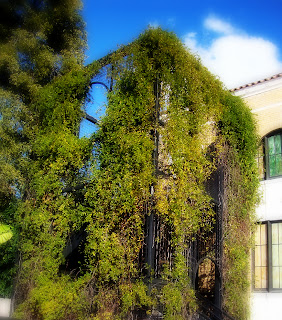 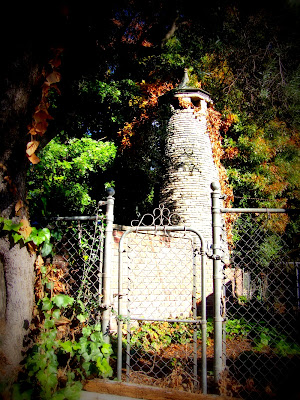 That's a treehouse in the upper left picture. But so is the one on the right. It might be the most imaginative fire escape ever designed, serving an office building for no-nonsense professionals. To me it's a treehouse for grown-ups. I see it each time I park at my massage therapist's. I imagine how the privileged professionals might be using it in non-emergencies. Maybe they step out on the stairway for a cigarette break; maybe they tryst before clocking in. When that jungle vine is in bloom this spring I might hold a photo shoot within it featuring my etsy fairy garb. Peter Pan and the Lost Boys will join me in spirit. I will make it my treehouse in my way.

A few yards away is this Rapunzel turret. Just sitting in someone's back yard, not feeling out of place or time even though it's in the middle of downtown. You can pretty much spin any fairytale or horror scene around this. The lovely thing is you get to decide what it—and anything else for that matter—means to you. That's a luxury when you feel not much else is under your control. It's the feeling of helplessness that gets most people down.


"Assigning meaning is a human ability. It's usually exercised in snap decisions, first impressions, and unfortunately, gossip-mongering. Discovering true meaning is a function of the intellect working in harmony with the soul, usually over time."

— Scrollwork, in Say What? The Malady of Malarky

"You do not see things as they are; you see them as you are. Interpret your own experiences. All experiences are neutral. They have no meaning. You give them meaning by the way you choose to interpret them."


When you compare your life to someone else's you're bound to favor the other person's. That's because we only see what's on display in the store window. But everybody suffers, Buddha taught, even those who seem to us to be richer, more educated, more privileged than we are.


This past year boosted me to the peak of contentment. I cannot remember having felt this grateful at any other time of my life. Yet the path that led me here began with a life-altering loss, a loss which has not been restored in the conventional sense.


Perhaps because contentment is so new to me, I had to ruin it with guilt ("I don't deserve to be so happy when there are so many people suffering.") I felt compelled to set up measures of progress and success, which I then downplayed as fleeting when I did achieve them. I let it get to me when I heard the hubby summarize my status to his friends as "so happy to stay home," as if my ballroom dance instruction, freelance editing, clothing design shop on etsy and amateur photography on flickr do not exist—do not, in fact, contribute substantially to my fulfillment, if not my pocketbook.


God always finds a way to snap me out of this uncharacteristic funk. A little perspective restores me. This time it came in the form of a reply to a comment I made on P.S. Jones' blog, Diary of a Mad Freelancer on Dec. 9.


She wrote, "I sometimes sit at my sewing machine and dream of having my own indie clothing line. You're living my not-so-secret dream."


By golly if that doesn't make me sit up and want to keep on keeping on!


How has this year treated you? Do you have a surefire way to catapult out of the doldrums? Share in the comments section!