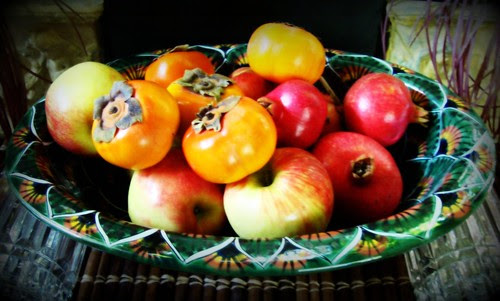 Abundance, originally uploaded by scrollwork.
Nothing like paring down to bare essentials to rediscover what exactly those essentials are. In January of 2010, I scribbled some thoughts.

"There's a line from a Leonardo DiCaprio movie:

'Know what you have, what you want, what you can do without: inventory control.'

I had to pause the movie to stew in the parallel to my life right now.
The story is set in the 1950s and portrays suburban angst and lives of quiet despair within cozy white bungalows. The angst would ring hollow if set in contemporary times, when holding on to a job and a home would mean you’ve escaped the famine…for now.

Hollywood, and the fans that support this massive system, make “living your dream” a religion.

I don’t dare claim the privilege of having a dream. Right now it’s a daily victory if I manage to quash the fear of my husband also becoming unemployed.

Being unemployed has me envying the postal worker who complained she has to work on Saturdays. It has me being even nicer and more appreciative toward service workers, retail clerks and food servers. Everyone with a job is doing the honorable thing.

When I did have a job, I spent money as one who makes burnt sacrifices at the altar of the implacable god of the economy. I was pumping out stimulus money in a microeconomics way, picking up the tab when friends and I would lunch. What serendipity that I spent the first half of 2009 doing what would turn out to be a dry run for being unemployed: I lived on half my net income, resolutely paying off my credit card debt with the other half. It’s how I learned what I can do without.

Turns out, plenty. I can do without twice-monthly massages and monthly chiro adjustments, haircuts, meals out that hardly satisfy, movies at the cinemax, several bags full of clothes and knickknacks on a whim every weekend, and any acquisition from a junk mail catalog."

Eleven months later, I find that my outlook is different. It's not about what we're doing without (and don't even miss), it's what we had all along that barely merited a glance.

Happy Thanksgiving. Tomorrow when I celebrate another birthday, it will be with full awareness of the abundance with which we have been blessed.
at 11:15 AM 3 comments: