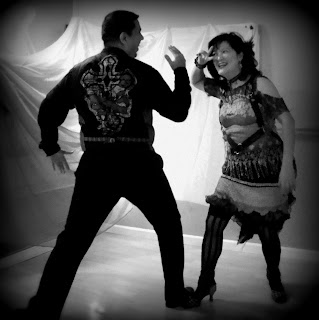 You can make something out of anything, and a somebody out of anyone. Start with that premise, and be amazed at how far you can go.

I started sewing my own Halloween costumes in 2000 for the company contest (which I won that year). From being a speechwriter I reinvented into a dance instructor in 2007, so in addition to the ghoulsfest, the annual dance showcase challenges me to stretch my resourcefulness. I am committed to reducing wasteful consumption by refashioning clothing. I come alive during the process of fleshing out a character through costuming and choreography. My twin passions intersect when I plan for each showcase. This year we documented the journey. 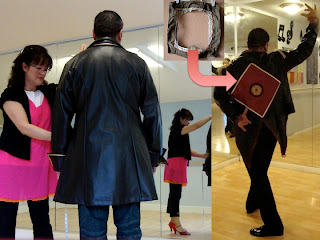 Paso doble costume for a male

I'm guessing the $5 faux leather coat had been someone's pirate costume. It had gaudy gold strips outlining the thick cuffs and collar, both of which I cut off to neutralize the pirate look. I had a vague idea to make a combination of Hugh Hefner's lounge robe and a ringmaster's waistcoat.

With a little trepidation I shortened the front to waist-length. I cut a swallowtail hem in the back and edged it with crinkled copper fabric from a bedskirt. Fortunately, the faux leather was supple and easy to pierce with a needle by hand.

Still unsure of how to complete the look, I went back to my favorite thrift store and roamed the aisles. Voila! I spotted paisley polyester pajamas, from which I harvested cuffs and collar, as well as a silky throw pillow sham with an exotic medallion design. That's the wine-colored square on the back of the leather jacket. 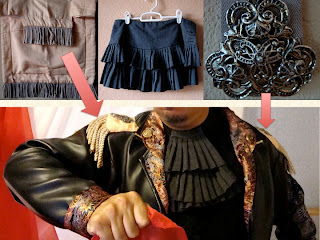 At this point it was starting to resemble my vision. But it needed some edge. I found a $2 pillow cover with fat gold fringe and cut two of its corners to serve as epaulets. Now it had a touch of the matador. I'd had a stretch belt with an ornate buckle tucked away in a drawer for a while. Its time had come. The buckle added substance to the epaulets.

So much focus was poured on the jacket, while the ascot was an afterthought. I'd seen a tattered lace ascot on etsy. That inspired me to quickly fashion one from the pleats of a $2 gray tweed mini skirt. It has a pin back to attach to the collar.

We planned the choreography to include my peeling the jacket off my partner and tossing it aside. It came off easily during practice, but at the performance I panicked momentarily when it wouldn't budge after the first tug. We had three seconds to accomplish the disrobe before the tempo changed and we commenced the next pattern of steps. Watching the video now, it took me just four seconds, but felt like quite a stretch of time. 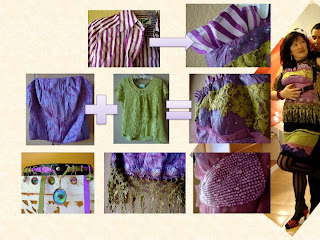 Paso doble costume for a woman: For this project I pictured a blend of bawdy bordello/burlesque and dainty, demure coquetry. The most delicious decision was choosing the colors. The first piece I picked was the iridescent pink top that must have been part of a prom or bridesmaid gown. After that, everything else in my roomful of used clothes in any shade of pink or green clamored to be included.

Stripes were a must-have because they added punch to many of the boudoir-themed costumes I viewed online for inspiration. Lace alluded to peekaboo naughtiness. For extra glam, I purchased the handpainted lacy fringe and wide swath of beads on etsy, as nothing else at the thrift store thrilled me. 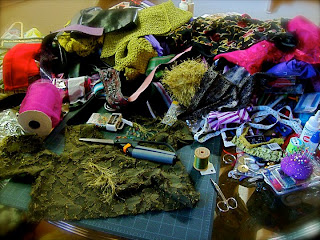 I accept any and all possibilities before I edit the pile on my dining room table. Sometimes adding one element opens up new forks in the road. I start new piles without putting away the previous piles. Tidying is antithetical to the flow! But perennial piles render sit-down dinners impossible. This is partly my strategy to get my husband to  take me out to dinner often : ) Today I had to throw down a comforter and some pillows on the floor of our family room/home gym to meet with an editing client, as nowhere else was uncluttered.

I usually perform two dances per showcase, each needing a costume with numerous parts. So I show up with carry-on luggage. One thing I've learned: Pack the pieces in the order they need to be put on. See that dark green lace cropped shirt on my table? I didn't get to wear it during the performance. I'd already donned the bustier, tightened the corset back, and chained the bustle's leather straps to my choker. The shirt was supposed to go under all that. 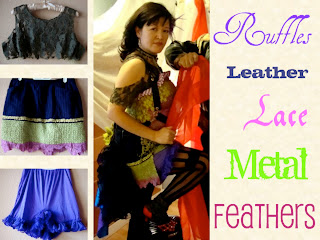 The skirt: The hardest part was settling on a design. I had intended to create a cage skirt but veered off in another direction. That often happens during my process. Sometimes I get stuck on the dizzying merry-go-round of options. I have to fling myself off, hit the ground hard and just pick one because I don't want to have to climb back on and resume spinning.

I wanted the skirt to be short enough to show off the garter belt snaps that I had intended to dangle from the "cage bars." Both the cage and the garter belt were eventually dropped from the plan when I realized it might be overkill to have more vertical lines on top of the striped hosiery. Overkill? Ya think? It seems moot to have worried about it now, looking at the finished product. Over the top, without apology.

For the top half of the skirt, I cannibalized a stretch pair of purple pinstriped pants. The chartreuse lower part of the skirt is a strip cut from a stretch shirt so huge I've used so much of it for other projects and still have lots left over. The pink lace hem is from a camisole so tight I resent anyone slender enough to fit it. : ) 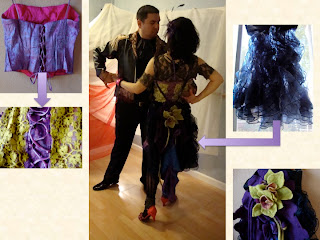 The bustle: The paso doble conveys the female dancer's imperious attitude with much swishing of the skirt. Since I'd be wearing a mini skirt, I needed something else to swish. The bustle met this need perfectly. I started with one of my earlier thrift store finds. It was a black skirt with a cascade of organdy ruffles topped with a satin waistband. As soon as I saw it, I knew I would find a use for it eventually.

Using an old leather belt, D rings from other old belts, grommets, and strips from the front of the faux leather coat, I made a harness for the bustle. I didn't want the shoulder straps to keep slipping off during the dance, so I added a strip of leather across the front, just under the bust. Then I took a chain from an old dress and used it to connect the back straps to my leather choker. I was so grateful that a fellow dancer was in the dressing room with me to help me dress.

The fabulous orchid is a scarf handmade by etsy felt artist evgene from Latvia. I basted it onto the bustle and will detach it to wear as originally intended when cooler weather comes. I can't wait! In the interest of full disclosure, this item was my splurge at around $80 (including shipping). There was no way I could make it myself, and it's something I'll be using season after season. All the materials for the male and female costumes each totalled under $20. 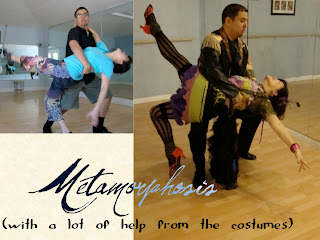 Since our choreography involved an over-revealing dip with high kicks, I wanted something under the skirt more unpredictable than black shorts. In my washing machine I dyed a new pair of knickers purple and gathered strips of nylon from a vintage nightgown to form ruffles along the bottom. Then I could kick without a care. 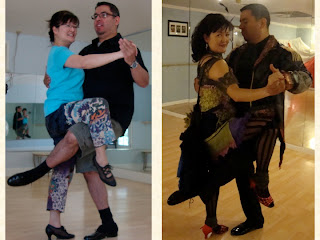 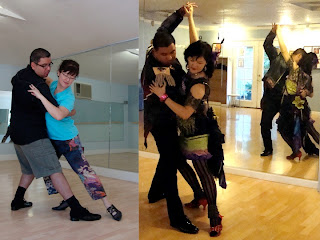 We performed the paso doble to "My Sharona" in front of a vocally appreciative audience of fellow dance lovers last summer. It's easy to see the transformative effect of costumes and confidence. It's what I love best about being a ballroom dance instructor: being instrumental in guiding a soul toward transcending perceived limits. It's also what I value most about the craft of upcycling: being a catalyst in the shift from the ordinary to the remarkable.

*Photography and art direction for costumed choreography poses courtesy of Heidi Gomez, You Can Dance Co.