Between me and the deep blue sea 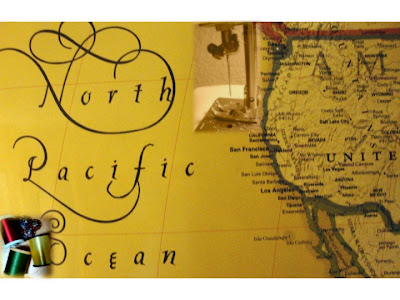 I am afraid of my sewing machine. There, I’ve said it. It wouldn’t matter much, except my fear is what stopped me dead on the tracks as I zipped along toward my reinvention. In my dream new identity, I am a derelict clothing designer, upending mediocrity in women’s apparel and thumbing my nose at cubicle convention. I offer slices of delicious escape to women weary of conforming. I aim to dress fellow misfits who want to make peace with their weirdness.
It’s farfetched when you consider that I have zero background in fashion design and business management. In the last decade I had settled into making a living writing about abstract concepts—leadership, mentorship, gender equity, the value of higher education. Every job I’ve had was a step off a cliff. I had no practice as a reporter, speechwriter, desktop publisher or instructor before becoming one. Whatever skills I didn’t already bring to the table I learned on the job. Fear never derailed me.
Most people fear spiders. I squish them without squirming. Many quake at the thought of public speaking. Pffft. My first job out of college was teaching public speaking to sophomores at my alma mater. My last day job was coaching a CEO on delivering the speeches I wrote for him.
Some people freeze on the edge of the dance floor. As an instructor in ballroom and Latin dance, I demonstrate the promenade, the Cuban chase, the infinity spin and such in front of crowds of strangers and perform several times a year.
But the domestic arts have always been my Kryptonite. That sewing machine haunts me. For years, I kept it boxed in a dark closet in a room I never enter unless I have to store more stuff. It’s not even mine; I bought it for Mom when she visited more often. Now she pleads old age. She says she’s too frail to get on a jetliner and cross the Pacific Ocean.
Summers when I was a tomboy, Mom tried to get me to sit still and learn how to sew. She was an effortless seamstress. I wore a lot of her creations. I should’ve been more appreciative. I should’ve paid attention. I should’ve made my own Home Ec projects instead of letting Mom earn the grade.
Somehow I managed to live nearly five decades without ever feeling the need to know how to sew. Call it a midlife crisis, but a year ago I burned out rehashing the same tired concepts on the job and set off to release my inner Ungaro, upcycled version.


I lurked on etsy.com forums, absorbing, keeping notes, hearting examples. I studied business start-up advice, amassed a roomful of vintage and thrifted material, took out a seller’s permit and designed a digital banner. I handsewed stitch by painstaking stitch, turning out flowy dance pants, frilly tunics, quirky skirts.
I fed my ferocious need to remake something in the image of my vision. It must be a control issue. There are few enough things over which we have control, so let’s let loose with what we wear when we’re doing something for ourselves. Let’s dress for life—not for approval.
I may have the beginnings of my business manifesto! It’s coming together and falling into place. Except for the pesky part about not knowing how to sew by machine.
Here’s the thing: most of those times when I learned how to do something new, I was doing it for the boss.  Learning how to sew will be for me—for the new me I am trying to fashion out of disheartened and disgraced remnants. Do you know what it feels like to attempt this reinvention?
My nephew, Vince, that eagle-eyed spotter of oddities that make great fodder for wry comments, noted Google map’s directions for getting to China from Taiwan. Head west, take this ramp, take this exit, turn left, turn right. They seem regular enough, until you come to:
Step#24: Swim across the Pacific Ocean.
Right. There. It feels like I am about to swim across the Pacific Ocean, and I don’t know how to doggy paddle.
Read more...
at 5:44 PM 1 comment: