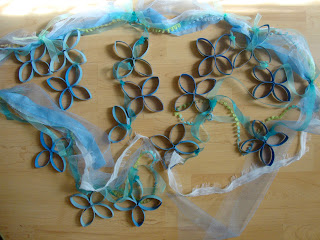 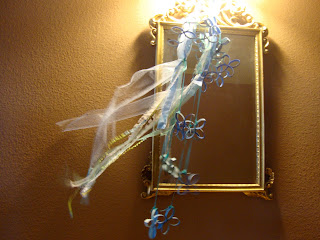 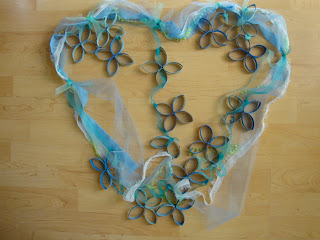 The Upcyclers team on etsy.com, to which I belong as a committed scrap crafter, challenged us to come up with something made of toilet paper tubes. For months I've saved them, but I couldn't settle on a design. There were so many great ideas online!


I had ambitions to create something like this for our Palladian window. I'd make only half of it, as the window is a half-arc. 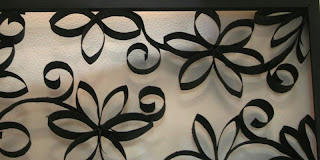 Then I downgraded the dream somewhat and thought I'd make panels like these for an iron lamp I've had in the garage for years. I might yet do that.

It took a deadline to get me off the fence. (Spoiler alert: I missed the etsy team deadline. I was busy practicing headstands at yoga teacher training this weekend.)

Last month the challenge was to upcycle a necktie. I took a blue and green necktie and handsewed it into a mermaid necklace, which took second place and earned my etsy shop, Swoosh by Scrollwork, a spot on the sidebar of the team's blog for a month. It looks like this.

I started snipping the toilet paper tubes in half, then quarters, then eighths. I didn't count how many tubes I'd snipped. I stopped when my hand got tired.

Then I glued together four loops at a time. The inspiration pictures above have five and six loops, respectively, but I was being a lazy bum about it. I ended up making 15 "stars".

Turns out four-looped thingamajigs look like a spirograph when stacked. I might make this the starting point of another project.


The most time-consuming part was painting each piece inside and out. I tried spray paint meant for silk flowers, but the can was so old that the paint slid right off. Confession: I have boxes of ancient craft supplies, including petrified glues for every need I thought I might encounter for the next 20 years. I keep them in the coat closet under the stairs, which my Mom has dubbed "the dungeon."


Luckily I found bottles of green and blue acrylic paint that weren't transfixed by the sight of Medusa's head, and a slender brush that hadn't had Botox. I had a moment of alarm when Charlie, my 18-pound Maine Coon, hopped on the dining room table and sniffed at the wet pieces. But all was well. Apparently watching paint dry was less interesting than watching grass grow from the safe enclosure of our second-floor deck. 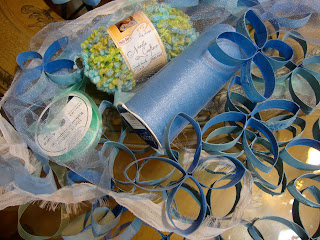 Here's what else I found in the dungeon to use: 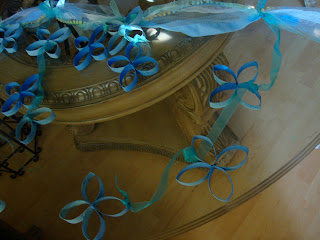 I cut the tulle, ribbon and yarn slightly longer than the selvage and hem. With short lengths of ribbon, I tied them all together at the center and at four more points about six inches apart.

Using more of the ribbon, I tied the loops of toilet paper tubes in bunches of three. You can see in succeeding pictures how these were done. At opposite ends and in the middle, they're in a vertical row. At the other two points, they're in triangles. 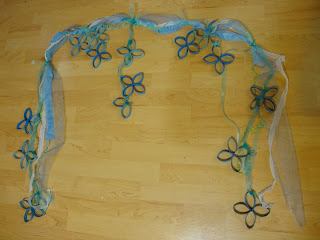 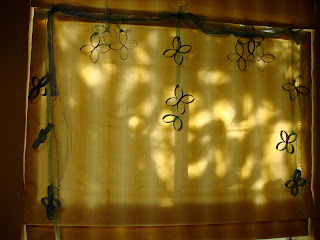 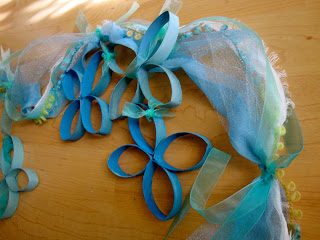 I could see this as a valance, where the shimmery fabric would cast a suncatcher spell. 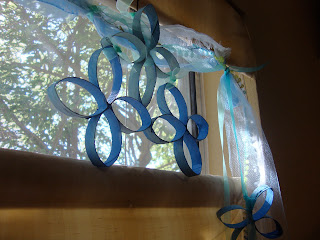 It would also be lovely strung across a child's four-poster bed. 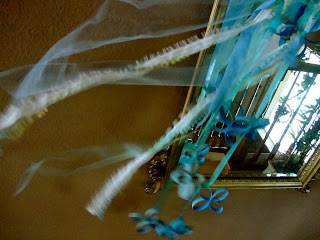 Quite by accident, I found it also acts like an indoor windsock, creating a cooling visual effect on a warm California afternoon. There's something carefree and casual about it.

Behind the scenes, though, I wasn't the picture of serenity creating it. 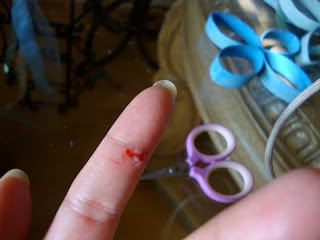 Outtake from the photo shoot. Ouch-take. But I'll live. 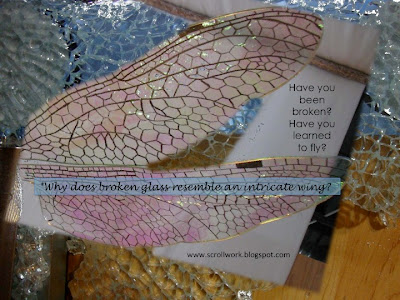 Last year my weighing scale broke when I bumped it ungently with the vacuum cleaner. I swear I hadn't meant to demolish it. But ever since then I've had a peculiar sense of lightness...hehe. What I don't know can't weigh me down.

Never one to toss anything without first examining it for possible repurposing, I decided the shattered pieces were suitable for a mosaic in some distant future. In this imagined future, I have ticked off everything on my queue of projects. Everything I have ever hoarded has been upcycled and listed in my etsy shop. I know, I dream big.

The present moment, however, gifted me with a doozy of an insight. Behold! Broken glass (tempered glass?) breaks in a pattern similar to dragonfly wings! What intelligent design ; )

If I'd sat there with a Sharpie and doodled, I wouldn't have come up with such a pretty pattern. The attempt at intricacy would've driven me nuts. My hand would cramp. And I'd get a little high from inhaling Sharpie fumes, because it seems to me every time I break out the Sharpie stash the wind is crazy blowing out there and I don't want to crack the window open. I am not imagining this. See what happened the last time? Read this.

Why not April Cools Day?


Stream of consciousness blogging. I had this near-creepy picture from a site for free images. I knew I'd find a use for it someday. April Fools Day is that day.

I went through the alphabet to pick a word that rhymes with "fool." Drool came to mind first, then ghoul, mule...I was sidetracked. So I went back to A and started over until I settled on "cool."

The mannequin's hair reminds me of wool roving. How I even know the term is because I've wasted the vestiges of my youth perusing etsy too much.

As with many blog posts, I started out intending to do a Facebook status update. Then I thought, "Well, it will get likes, but those are cheap and tawdry because they may be liking the picture, which I didn't create, instead of the caption. I'll not be able to separate the true likes from the cheap likes. Also, I haven't posted on the blog in a while."

So this is appearing on both blog and Facebook, as I seem to have very little crossover in readership between those two platforms (look at that, I sound like the social media self-proclaimed experts, spouting "platform" like it's part of my daily vocabulary.) If you're seeing this on the blog, you're seeing the behind-the-scenes of its posting. See, better to read the blog than skim Facebook.

Do you still send paper greeting cards? Do you spend way too much time picking the one that says just the thing you want to say, only more perfectly? And then do you hover over the blank inside, agonizing over what to write in your own words? This is how to start writing: You do free association. This is how this blog post was written.