An autobiography told in clothes and pictures

"Clothes make the man. Naked people have little or no influence on society."
— Mark Twain
I was engulfed by men in uniform when I was growing up. For seven years, we lived in Nichols (now Villamor) Air Base in the Philippines, where Dad was a colonel. Every morning we were trundled off to school in a weapons carrier with an olive green canvas roof that leaked when it rained—which was six months of the year. The drivers were enlisted men of various rank. We called all of them "Sarge." I never did learn to distinguish the stripes on their sleeves.

I've lived 15 years in uniform, all while in school. In mid-life, it would become the itch I needed to scratch, the ditch I clambered to escape.

I went to three different elementary schools and wore three uniforms. I found a picture of myself with my two best friends in the first grade. 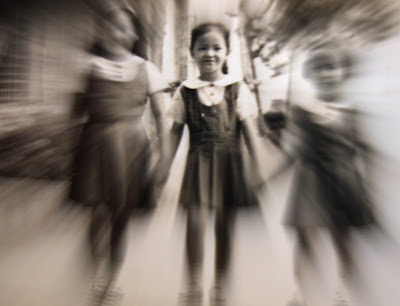 You are not having a pre-migraine aura. I tinkered with the picture to protect the identities of my chums. And anyway I've forgotten their identities so I can't very well ask them for permission.

My brother and I were in the choir during our nerdy childhood. I tried disguising his face with more digital tweaking, but his head looked like a giant peppermint lollipop when I was done. So I cropped him out except for his sleeve. I may have forgotten to put on pants that Sunday. 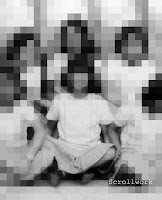 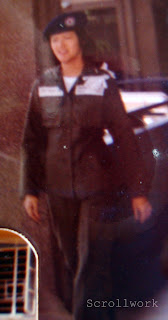 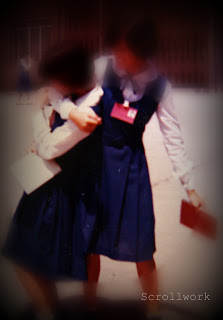 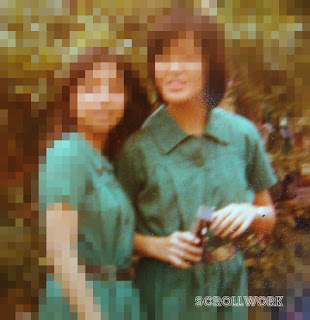 Two high schools, two more uniforms. Add to those the army fatigues required every Friday during compulsory military training my last two years of high school. We all cropped our hair to show the nape. This was in the '70s. No Farrah Fawcett hair for us. May she R.I.P.

All through high school, we wore boys' leather shoes with white socks. I see I've done a lousy job of cropping these photos to where you can't see them. We polished those puppies to a mirror shine, trust me.

Plus there was the Girl Scout uniform. I wore it for a day so I could go on a scouts-only field trip to the lake. Not my idea! Someone lent me her extra uniform. It's the only time I ever pretended to be someone I wasn't. That is, someone who knew how to swim. I didn't learn until I was 17. 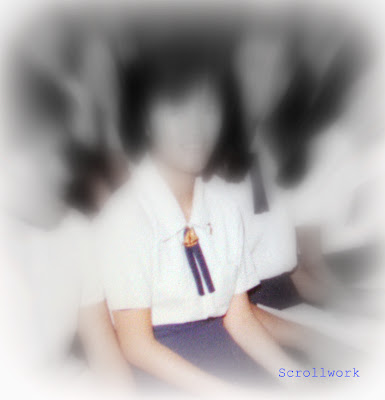 Then a uniform through four years of college: That makes a total of nine.

Fashion was a remote concept to me then. What would've been the point? When would I have worn anything other than a uniform or a house dress and flip-flops? My parents would never have allowed me to go to parties. It never occurred to me to ask. I don't remember ever being asked to one, anyhow, so the situation never presented itself.

It dawns on me now how simple my life was. All those years spent with my nose between a book. I might've been a wallflower, but since I never partied only to sit dances out, who could tell? Who knew I'd end up a dance teacher in mid-life?