Is it sacred to you?

"It’s dangerous to have a point of view, because just by taking a position, you create the opportunity for an opposing position.  It’s scary to be challenged, but it’s part of the deal.  I always see artists say they welcome dialogue and want people to talk about their work, but what they really mean is that they want praise." — April Winchell, founder of Regretsy


Upcycler, you done crossed the line.
You take forlorn figurines and paint gaudy colors and skulls over them. I get that. Homage to Dia de los Muertos (Day of the Dead) Mexican folk art and tattoo art.
It’s just that there are things, religious objects among them, that are sacred to some people. Evidently not to you, judging by your reworking the likenesses of the Holy Family and the Virgin Mary. Something in me strongly wants to call you out. To me, you’ve defaced them. You’ve defiled them. But wait, I want to think about my response to your art some more.
Some definitions, so we get on somewhat the same page:
Upcycling means making something better. The betterment is what distinguishes it from mere recycling. Is what you’re doing to religious statues making them better? Your statues certainly sell well. They’re edgy. They’re eye-catching. They raise eyebrows. Mine, if nobody else’s.
Deface means to mar the surface of, to disfigure.
Defile means to make impure for ceremonial use; to desecrate.
Desecrate means to divert from a sacred to a profane use or purpose.
Profane means characterized by irreverence or contempt for God, sacred principles or things.
Sacred means it’s holy, sanctified, set apart—“Can’t touch this!” as Hammer sang. Yes, I’m from that generation. Which probably explains much of my discomfort with your type of art. 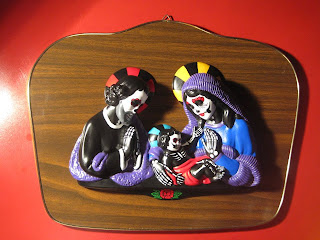 Your artistic statement makes me squirm. What exactly are you saying? Is this an expression of your angst, or an outlet for your ennui? Would you stay with this style if it didn’t already have a niche?
I went to your Facebook page (noting your 1,500+ engaged fans with envy and not a small amount of befuddlement). You wrote:

“My work is influenced by old school tattoos, zombies, day of the dead and lowbrow art…I noticed an abundant supply of boring vintage statues, just like the ones in your Nannas (sic) house.  So I had a go at giving them a new life for a totally different environment to live in…”

True, these pieces were dusty discards you found at the thrift store. Their original owners may have been bored with them themselves. Or maybe they had passed away?

Death can be viewed as sacred. So it’s not your superimposition of death images that disturbs me. It’s the defacing of something that was originally created to represent the divine and holy. 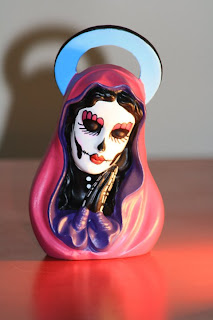 When an object’s original possessor gives it away, does its purpose end? Does it become a free agent, to be snapped up and repurposed as its next owner sees fit? Such could be said of practically everything material, which allowed the rise of the global upcycling movement. Which I espouse with a passion myself.
Does artistic license mean a free pass to mess with things that are sacred to some? Does boredom? Is it a greater cause to keep things from the landfill, or to tend to the realm of the spiritual?
The tension between art and sensibility isn’t new. Look up photographer Robert Mapplethorpe and the homoerotic/sadomasochistic exhibit that sparked “the culture wars.” In his case, the line being crossed was between conventional art—according to middle America, i.e., the Bible belt—and obscenity.
Then there was cross-wearing Madonna in the ‘80s and papal picture-ripping Sinead O’Connor in the ‘90s. Their acts were meant to provoke in a look-at-me-I-stand-against-something way. 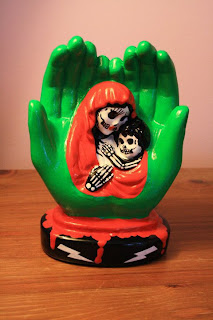 I didn’t get the impression from your interview on forbes.com that you set out to create controversy. I don’t know if you’d mind it. What I’d like to know is if you considered the impact. Did you hesitate before your virgin foray into upcycling the Virgin Mary? Do you know anyone personally who has a reverence for what such objects represent? Did you try to find out what these objects mean to people of a certain faith?
Does the furor or lack thereof depend on who is being offended? Over on Regretsy, commenters of various backgrounds excoriated etsy shops selling what could loosely be called an interpretation of native American headdresses. It is politically incorrect to disrespect native Americans. Anti-Semitism is a serious career killer—ask Mel Gibson. Would anyone in the media dare diss a Muslim on his prayer rug? But popular American culture…sigh. Pop culture thumbs its nose at the Christian faith. It teases Tim Tebow for genuflecting.
So, young Jason, I just wanted to make you aware, if you weren’t already, that you’ve ruffled some feathers, crossed a line you may not have cared to acknowledge exists. Now carry on. Who am I to censor you?

"Invisible is an option, of course. You can lay low, not speak up and make no difference to anyone.
That's sort of like dividing by zero, though. You'll get no criticism, but no delight either.
As for finding a homogeneous audience, good luck with that. The one thing that's true of all people is that they are different from one another. What delights one enrages the other.
Part of the deal." ~Seth Godin