Tourist in my own town: At the cemetery on Memorial Day

Surely there's a smidgen of meaning left to Memorial Day other than barbecues and beer with the buddies. My husband and I didn't set out to find it this morning, but when we drove past the local cemetery and saw the flags lining the walks, we stopped to pay our respects.

The stillness was a better backdrop for the rows and rows of flags than any John Philip Sousa marching band song could have provided. Just when I raised the camera to capture the sight, cold rain began to pelt my glasses. I ducked under a tree, blinded and stranded temporarily.
A handful of older men moved quickly down the walk, observing flag protocol by protecting them from rain. There was something moving about how determined and dignified they were. 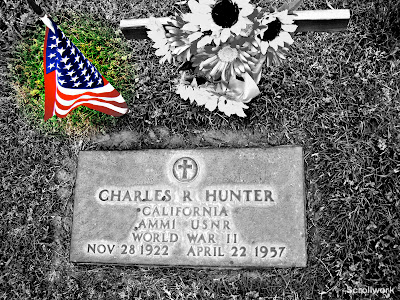 Acacia Cemetery is across the street from the city's Senior Center, a trivial oddity that my twisted brain noted when I first started teaching ballroom dance there. You can waltz into eternity without skipping a beat. How does it feel to be older, say in your 80s, and facing inevitable mortality? If I live to know the answer, I will be both lucky and unenviable.
I see the way an older couple can walk into a room and be practically invisible. It's the young, vibrant ones that catch everyone's attention. That supple skin, the flexible limbs, the taut core muscles, the full set of teeth. Are we afraid to be reminded of our own aging process? Is that why we seem dismissive of the old? 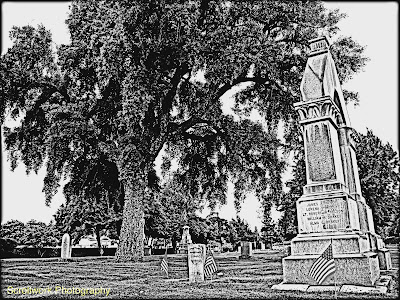 When the rain eased up I made a run for the car. The flag keepers and their tractor-size truck were lumbering toward us. It didn't seem like there'd be enough room on the pavement for both our vehicles.
"Back up, give them room," I frantically urged my husband as they got closer and closer.
He just sat there, deathly calm, saying nothing. My Filipino upbringing came bubbling to the surface—the compulsion to be accommodating, to not be an inconvenience, to put the good of the group before the good of the individual, to not disrespect my elders.
His Midwestern upbringing rooted him to the spot: to stand his ground, to claim his place, to expect equal if not deferential treatment.
The tractor began angling its nose off to the side to avoid us. Its driver looked my husband in the eye and gave him a nod as he drove past, one veteran to another. The men on foot grinned and walked around us.
Sigh. Hubby chided, "See, you were too self-conscious."
My protests went invalidated. But, I noted, if I'd been with another Asian fellow, those same men might've muttered to themselves, "Dang, can't count on these strangers to get out of the way."
How can you put yourself in another's shoes if you've never been anything but what you are? This country is his home turf; he has never been treated differently based on his appearance.
I, on the other hand, have been grappling this past week with the concept of respect—when to give it, expect it, demand it, being that I am not quite old, not quite American, and not yet dead.