How to make a wind chime from utensils—the lazy way 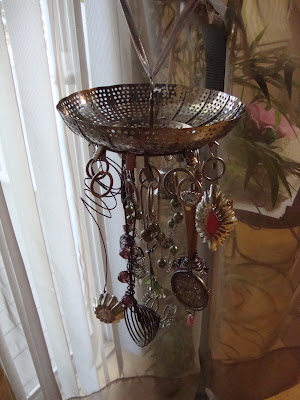 The August challenge for Team Upcyclers on etsy.com was to repurpose utensils. In one evening I put together this wind chime from whisks, a tea strainer, tin molds and a veggie steamer. Most of the utensil wind chimes pictured on Pinterest and Google Images were constructed with forks and spoons, and I felt compelled to use something else.

These whisks called out to me with their fascinating spirals. They were keeping company with unremarkable butter knives in a plastic shoe box at my second favorite thrift store (a search through my favorite one having yielded nothing.) When I saw the veggie steamer next, I knew the project was guaranteed. 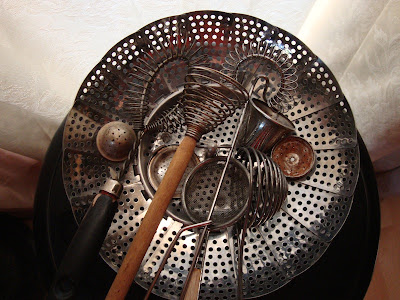 I couldn't resist playing with the little strainer and this thingamajig with a spiral cup at one end. They look like they're having relationship problems. They start out being one, then she tries to leave, he chases her down and makes her stay. Shadow theater over. 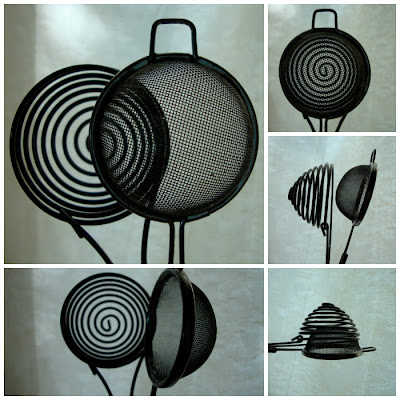 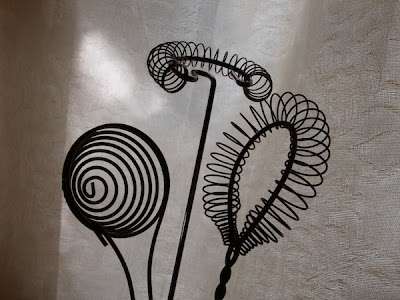 Now this trio here look like curly-headed chums. If they could speak they'd go around saying, "Boing, boing, boing..." I've named them Larry, Curly and Moe. I knew just from looking at them that I wanted to bedeck them with beads and colorful wire. They're not the leather and lace sort. You can tell. 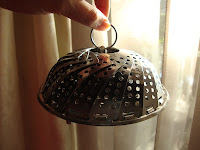 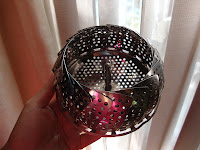 The steamer can fold and unfold its petals. Bonus! That would give the wind chime several looks to suit your mood. At a glance, your sweetie can gauge if you're approachable or not. Ha! 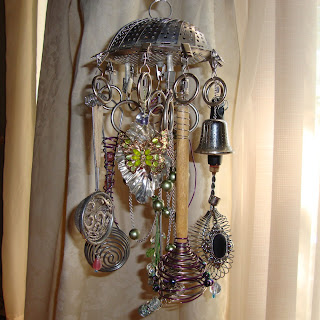 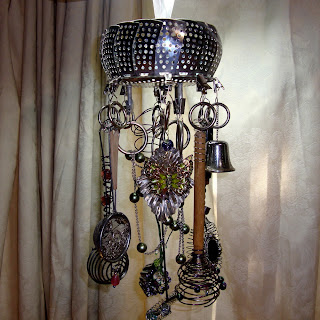 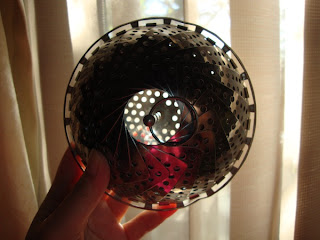 The steamer has an outrigger of sorts, which lit up the part of my brain that reacts to external stimuli such as chocolate, a great bargain, and a well-built man. But I digress. The outrigger gave me the idea to clamp everything on with clip-on curtain rings. 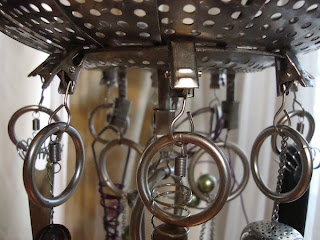 That reminds me of the original, unDisneyfied version of The Little Mermaid that I read as a child. She turned 15 and her grandma dressed her to go to the surface of the ocean for the first time. Granny ordered shells (mussels? clams?) to clamp themselves onto the Little Mermaid's tail. She protested at how they pinched. I don't recall the exact words, but Granny responded with something akin to "no pain, no gain" or beauty requires sacrifice. As a tomboy, I didn't get that. As a middle-aged woman, I wish it weren't true.

It was three days to deadline when I decided to make the wind chime, which meant I had no time to wait for paint and glue to dry, nor would I be able to wrestle with much wiring. So help me, God, I am a clutz with wire. Why I ever imagined it would behave as docile as thread is beyond me. Wire is as obstinate as my wild woman mane when I've washed but haven't conditioned it. Anywho, in lieu of paint and glue, I decided to use beads, wire, and clip-on curtain rings. 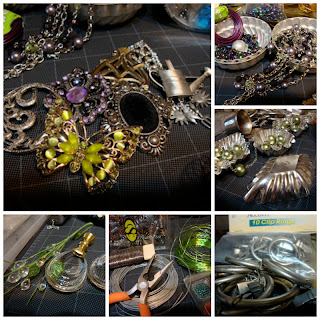 I rounded up a handful of brooches that I haven't worn in years, along with a couple of beaded necklaces. On my way back to the dining table I noticed the tin molds that had been sitting on the entryway table since the day I brought them home from a thrift store foray months ago. I scooped them up as well. The hubbadubs obliged my request to drill tiny holes in the tin molds so I could wire them. Actually I handed him a hammer and a nail to get the job done, but he came up with the idea to use the drill. He is so not a caveman. That's a good thing. 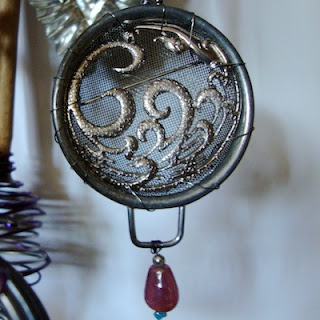 I looked at all the stuff I'd piled on the table and didn't know where to begin or what I wanted the wind chime to look like. But the clock said it was getting darn near close to bedtime, so I just picked up the closest thing and it happened to be the tea strainer. Plain old thing. The round brooch fit it just so. I wired them together about halfway and gave up. I have too many thumbs and not enough agile fingers. Luckily hubbadubs came to the rescue and finished wiring it. Then I added the little bead dangle. 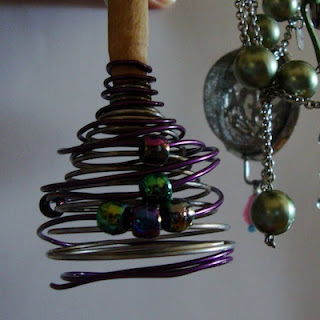 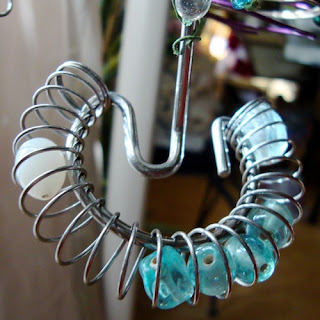 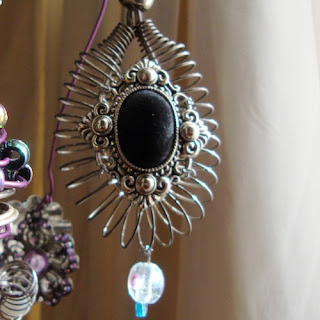 Larry, Curly and Moe's makeovers went swimmingly. Those guys could win the pageant. 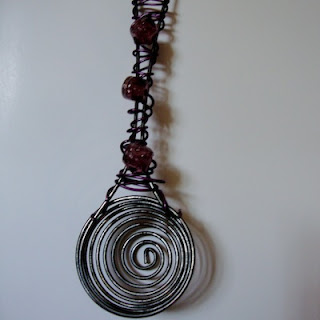 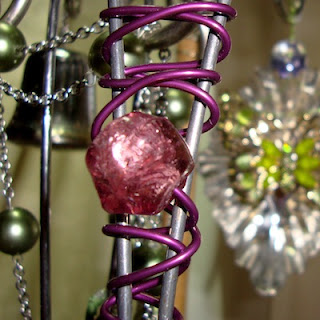 The spiral guy had enough of a mesmerizing thing going on, so I left that part bare. His stem got a bedecking with purple crisscrossing wire and several lavender beads. 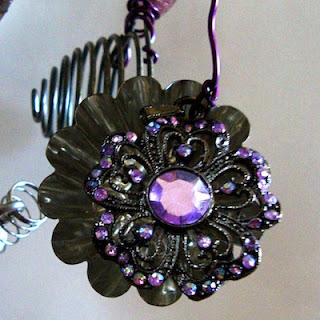 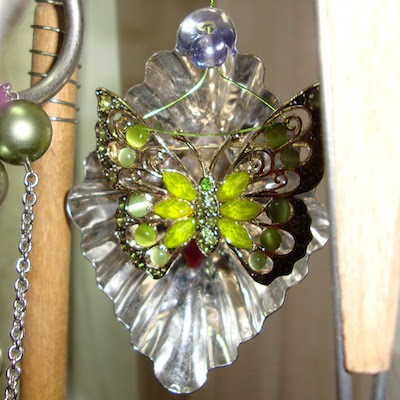 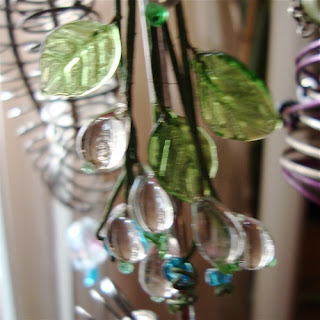 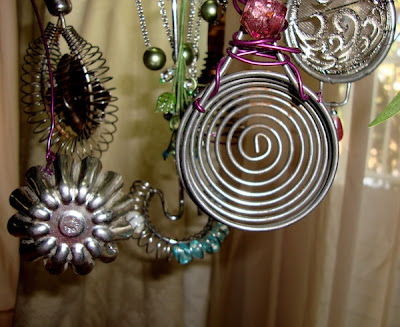 Once all the utensils were gussied up it was just a matter of clipping them onto the steamer, making sure they were equally spaced.

Let's take a look at the finished product again. 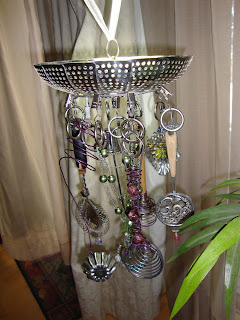 In retrospect, I'm glad I didn't try to paint this. I was even tempted to use sparkly nail polish! But that would've demanded careful styling so the whole project wouldn't turn kitschy. That was far more mental work than my sleepy state would allow.

What do you think? What would you upcycle to create a wind chime?

My teammates' imaginative entries can be seen on the team's Pinterest board. Stop by!