Redemption at the grocery: a Take Back Your Pride coupon 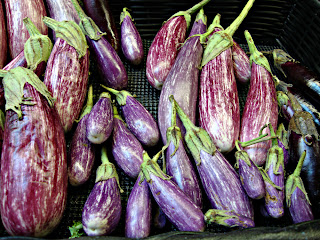 How do you recover from a creative lull? Feeling scraped-out hollow after the dance showcase, I took drastic measures: I photographed produce. Doesn't everybody recharge at the sight of food?

OK, I'm more normal than I let on. I didn't set out to stalk celery (ahem), but weeks of artistic sugar low were beginning to worry me. Dust thick enough to plant potatoes had settled on the blog, the upcycled clothing shop and my photography on flickr. Finally, I felt a familiar stirring. We were downtown at Greens Market when weird beauty beckoned.


Came the showstopper. Christi, who works there, said, "You should've seen it yesterday when they were in bloom." But I like it better like this, all gnarly and writhing. So much more pathos. They seem to be cringing from the glare, collapsing into themselves in the retreat.
It reminds me of a recent conversation I had with my youngest daughter, nearly 24—the age I was when I had her. She's probably the only person on this planet I can be most transparent with, and we take turns being the fount of wisdom for each other.
One of the phrases I don't particularly care for is "for your age." You look good/you're fit/you're doing so well—all great compliments until they're followed by "for your age." Most younger people haven't felt the full impact of such a backhanded compliment.
But for the first time, in the context of our conversation, the phrase took on the best meaning intended.
A few days ago, I'd been knocked off my rocker by a friend's action, which had ricocheted at me out of nowhere. My usually imperturbable self-esteem had taken a hit. All because the friend had reneged on our previous agreement and chosen someone over me THEN lightheartedly cited the younger woman's physical attributes in his defense. A double whammy.
Times like these called for not just any BFF, but someone who owes you big-time for the 11 1/2 hours of contractions you endured to push her out into the world.
"Dialing Boo," my cellphone said. I felt comforted already.
My baby girl and I have perfected the art of debriefing and consultation within the window of time that is her lunch break. I've taught her well, by example. When it was I who had a day job we slotted her calls between deadlines. Now, apprised of the crisis in ego, she repeated to me a customized version of what only days earlier I had spoonfed her when she was reeling from her own oh-no-he-didn't situation.
"You're awesome."
"I'm awesome," I said flatly.
"For your age," she continued, specifying the components of awesomeness in my personhood.
"That girl," she added—and here's why I think she is wise beyond her years—"she's just young and beautiful, but she hasn't done anything with her life yet."
"She's your age," I noted. It didn't faze her. This girl, flesh of my flesh, could suspend her own need for validation for the moment to throw me a lifesaver. I took it. She'll need it back someday in the not too distant future, and I'm keeping it warm for her.
Because really, what other defense do we have against the obvious onslaught of time and the sharp though unintentional jab of a friend?
"You should've seen me when I was in bloom." No, that does nothing.
All we can do is point to our progeny and hope the blind can connect the dots: She's a beauty, and some of that must've come from, um, me.
As for the friend—Are you going to Scarborough Fair? 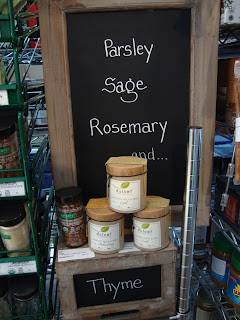